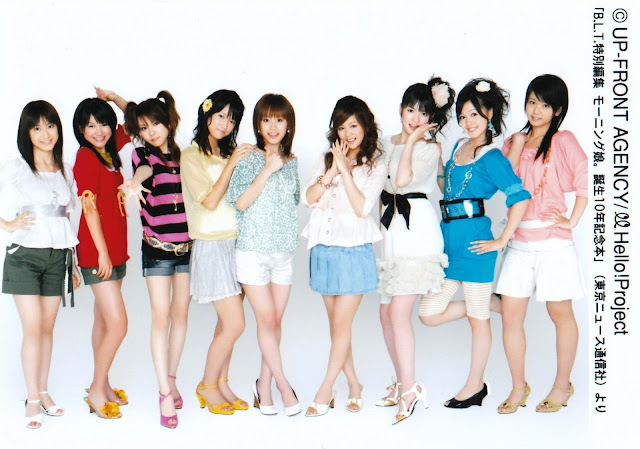 Yes, everyone else has given their two cents already, so there's probably two dollars worth of opinions out there.

First off, let me just say that Mikan when put next to Resonant Blue, is MUCH MUCH MUCH more inferior. To be honest, I thought Mikan was a DECENT single, but Resonant Blue was just amazing. I cannot believe how much I am loving this song!

Now, can anyone enlighten my on which part is supposed to be the chorus? The whole song sounds like it has two different choruses. First one is:

And both of them would sound great as choruses in two different songs to be honest. But of course I know the one that screams "RESONANTOOOOOOOOO" is the chorus, but if we weren't given the title to this song, I'm pretty sure a good handful of people would guess the song was titled "Don't Cry" or something.

While both choruses are well-loved by me (I've been listening to it on repeat on my way to work), my favorite part of the song would be the ever-catchy "Dakedo Ne Ne Dakedo?" lines. On first listen, the line made me giggle a little, since here in Singapore, "Ne ne" is simply a crude and childish way to say boobs. Not that boobs is any more mature, but I don't want to have official names of "parts" on my blog.... yet. Anyways, i digress. The line eventually became "Dareka Ne Ne Dareka?" which given my sub-standard Japanese and dirty mind seemed to mean "Whose boobies? Whose?!".

And given the song title.... They're just asking whose boobies are blue. And Resonating it at that. Scary thoughts.

So the rest of the non-blue-boobied Momusu tell the poor girl that she should "CRY CRY DON'T CRY". I'm sure the poor girl is confused as hell as to what to do.

And so poor Blueboobs sing "HELP ME HELP ME HELP ME". As clever as I am (COUGH COUGH), I really don't know the solution for that my dear girl. Surely it isn't the same as blue balls? Not that I have blue balls either. Ok, let's move back on topic, this post is getting excessively off point.

Another impressive line in the song was "OOH BABY!" sang really nicely by someone which I cannot recognise for my life. (Specifically, the line that goes "Toshi ue to kai wa suru no sonna nani ku ja nai keredo OOH BABY") Powerful, sexy, yet sounded slightly suffering. It was very well done.

There are some parts of the song which I don't really like, but I'm hoping the PV will clear up some of these for me. One of them is the parts after the "Dakedo ne ne Dakedo" and "Dareka ne ne Dareka" parts. That line before the chorus sounds creepy, like some kid who sees ghosts all the time, or some child ghost saying "Don't you want to play with me.....?". Aikes.

Another "HUH?" moment was during the Arabic musical interlude or something near the end of the song. I mean, in what way is this song supposed to be Arabic? And what is with this Arabic thing nowadays anyways? AAA, then NEWS and now Momusu? Let's hope it's a phase, and not some new-era-defining genre or something.

But all in all, the song was still catchy as hell, and much more memorable than Mikan. I had to listen to Mikan for a week or so before I could remember the tune. With Resonant Blue, I have little to no trouble. So needless to say, I should preorder this single soon.

Now if only I can get rid of the blue boobs images....

(P.S: If anyone can tell me which event that photo came from, and whether I can still buy it or not, I'll be deeply grateful.)

Ok I found it. xD