Saturday, March 22, 2008
I really did not intend to hurl insults or bitchy comments at the one-ear-deaf, 10th-year-anniversary-celebrating, yet makes terrible choices, Hamasaki Ayumi anymore. But honestly, I couldn't resist it. xD

Her latest PV Mirrorcle World is just so wrong and so warped on so many levels that it's really just very confusing. 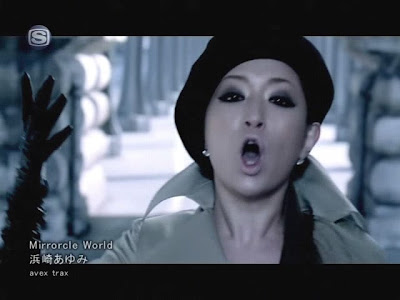 She starts off singing to the camera in an overly-exaggerated manner that makes her look like she either went for too much botox, or that some sad scientist figured out how to make blow-up dolls how to move around. I'm not going to comment on the hat-cover-one-ear thing. And what is with the flasher/full overcoat costume that she just LOVES to wear? I know it's cold and all, but don't you have SOMETHING else to wear?! Surely you aren't THAT poor are you? 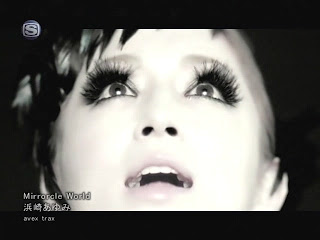 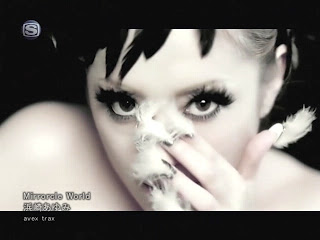 Horror of horrors. If this is where the trends are heading to next, please remind me to stay at home to keep my nightmares at bay. CATERPILLAR LASHES AND NAILS?! My hand floated uncontrollably to the screen while the PV was playing and convulsed in a manner that scared even myself. Don't you just want to grab those and pull them off and set them free? I highly doubt there are any caterpillars out there whose whole life's ambition is to be Ayumi's eyelashes, seriously. Some insect-protecting organization should sue her. 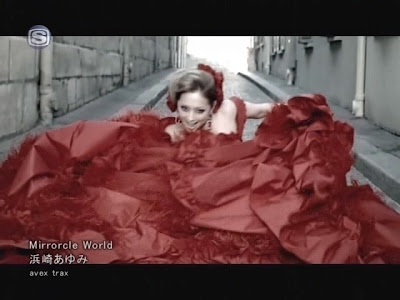 "KYAHAHAHA! MY I HAVE OPENED MY FLOODGATES OF MENSTRUATION! YOU SHALL ALL DIE!" 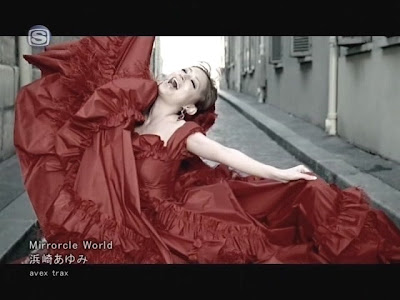 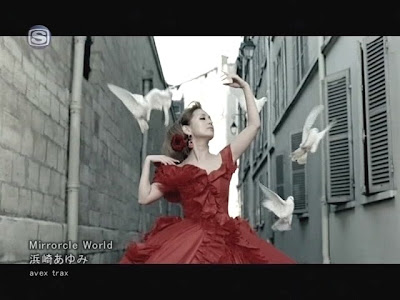 (And I shan't even caption this one. It's already too funny on its own.... Oh what the heck.)

Told you it was amusing.

Before you start asking about what made me think it was menstruation to start with... 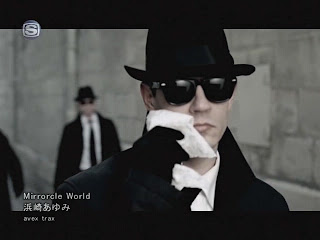 ... she left her extra pad behind (god knows she doesn't need it now, what with everything flowing everywhere). And the kinky guy actually took it and rubbed it against his face. URGHHHH.

There are also SO many odd incidences in this PV (as if there weren't enough as is). 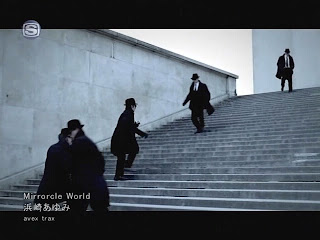 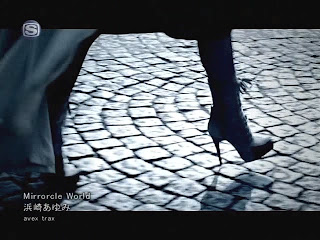 Firstly, I assume these odd Charlie Chaplin guys are after Ayumi and are trying to capture her or something. Considering they have at least 5 guys, I honestly can't figure out WHY can't they capture an extremely small-framed woman in what seems to be the WORST running shoes in this world.

I mean, these guys are so bad, that Ayumi even has to mock them. 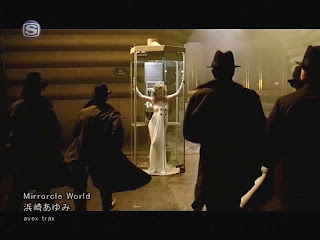 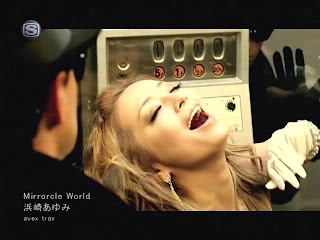 Amongst all the running, she still manages to have time to change into another outfit and to make things easier for these seemingly low-intelligence guys, she traps herself in a phone booth and waits for them to attack! Oh but that's not all. While she was inside the booth, these guys did not even have the sense to smash the thing open and capture her. Bored, Ayumi decided to entertain the guys outside by singing, staring at them intensely and having what seems to be an amazing orgasm. 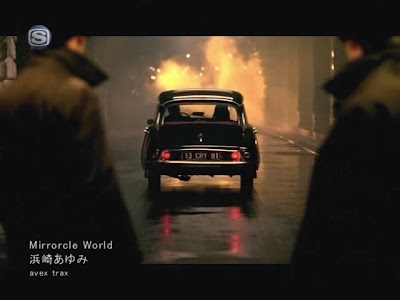 And so she finally escapes from them all in a car that she seems to have called or something. Man, if I were on the run from some idiots in those killer heels, I would be MADLY pissed with this guy that is supposed to be rescuing me. I mean, I HAVE BEEN RUNNING FOR AN ENTIRE DAY. WHAT TOOK YOU SO EFFING LONG TO COME YOU MORON.

And so the car drives away slowly and the dumb guys chasing her just stare in shock, as if they've never seen a car before. That or they were still reeling from the shock of Ayumi's little performance in the booth.

And of course, before she gave her performance in the booth... 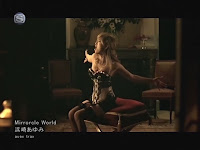 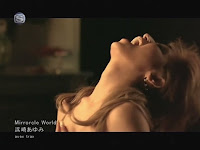 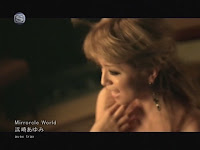 ... she had to practice at home. Hey, it's an art after all. The girl's a perfectionist, you've got to give her that.

Ladies and gentlemen. Hamasaki Ayumi is a real kinky girl, who is an exhibitionist and has a fetish for caterpillars. BEWARE! Run while you can!