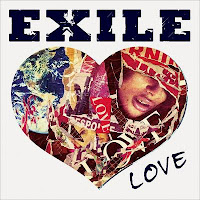 It's little wonder why EXILE's latest album is titled EXILE LOVE. The tracklist alone speaks for itself. With 4 songs with the word "love" in their title (1. What is Love, 6. Make Love, 7. SUMMER TIME LOVE, 9. love), this album turns out to be a very lovey dovey album.

To be honest, I ordered this album purely because of the DVDs. 5 PVs, a mini-movie and a concert was simply too much to pass up. I won't be receiving my copy till January, but I'm just too impatient to wait that long, so I've downloaded the whole thing and took a listen to it. I must say, from what I've heard so far, it's a pretty solid album.

Just to make my job that much easier, I shall leave out the songs that have been released previously (which includes I Believe, Hibiki, SUMMER TIME LOVE, Toki no Kakera and 24 Karats -type EX-). This leaves me with 9 songs to group into the good, the soso and the bad.


Beautiful is undeniably pop, with a light and bouncy tune. In fact, this seems more like a song written for BoA rather than EXILE. Both Atsushi and Takahiro (to be completely honest, I can't diffrentiate between the two) does well in this song, giving it enough cheer to make this song a happy one. I'm pretty sure this catchy tune will be stuck in my head for many days to come, which is just as well.

Kimi ga Iru Kara seems to be following the style of the 90s ballads that avex seems to be prone to releasing lately. Strings and piano makes up the bulk of the music in this one, which contributes to the 90s-ness of this song. The first verse and the verse before the chorus seems to come from totally different songs (the one before the chorus sounds like it came from a Disney song), which adds contrast and interest to this otherwise forgettable song. Another song that runs in the same vein as this song would be Kawaranai Mono, which is worth a listen too.

Up till this moment when I'm typing this paragraph, I'm still not decided whether sayonara should be considered a good song or a so-so song. It starts off with simple music, slightly acoustic and lounge-y if you may. If you've read my previous reviews, you would know that I love simple pieces, which was what this song seems to be going towards.

However, it all changes after the first chorus. More unnecessary instruments join in, which clutters the song just a little bit. After the second chorus however, even more instruments joins in (either that or the instruments simply got louder), which complicates what could have been a simple and beautiful piece. The tune is soothing till the very end, which makes it an enjoyable listen nonetheless.

Sora Kara Ochitekuru Jazz has a very odd balance between the music and the vocals, with the music desperately trying to overpower the vocals, yet not doing so throughout the song. It also sounds like someone very fickle wrote the song. It tries to be wintery yet sound summery at the same time. There's also some pinches of electro here and there which is pretty out of place. The jazz is kind of lost on me though (which is pretty ironic). However, the song is salvaged by a pretty ok tune. This would otherwise have been a horrible song in my books.

Touch the Sky is a typical dance song by EXILE. Usually I would write off these songs without a second thought. However, this one is pretty interesting at certain parts (stress on the "certain parts") of the song. Not suitable for long periods of listening though, as it can get VERY jarring. Messy vocal arrangements at certain parts make for a slightly irritating listen.

love is pretty impressive on the first couple of listens, but soon loses my attention with its none too interesting tune. This is a forgettable song that sounds best when its played in the background. Sad but true, it is a wintery shiny sleepy song, if that makes any sense. It sounds awfully like a Kpop release, and had it been a Kpop release I would have thought it was a good song. But for Jpop? It falls slightly short I must say.

What is love starts off with strings - pretty promising. However, it goes downhill from there. Echoing voices, awkward verses, no coherent tune to speak of, amongst many other flaws. This would have worked well as an acapella song I guess, that is if their English verses were polished WAY more. "I'm SOHREE~" doesn't impress me at all. Next time, don't bother apologising for the bad song my dear EXILE, simply drop the song.

Overall, the album is still a great winter album that is worth the buy, if you skip a few tracks here and there that is. The slow numbers are generally pretty good. It's the slightly faster dancier ones that lets this album down.