Wednesday, January 30, 2008
I've just watched a Taiwanese-subbed version of a very old Music Station episode that has Hirai Ken as a guest. Needless to say, I was thrilled at the fact that I could understand what he was saying and so here I am to share! I'm on a mission to advocate Hirai Ken and all his amazingness. All you H!P/JE fans, beware. 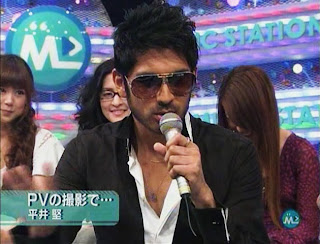 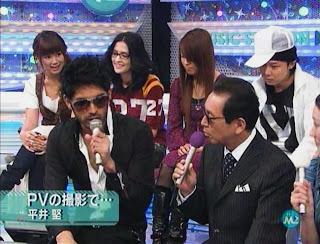 This episode aired around the time when Fake star was just released, so talk about his PV (and that lousy kiss scene) was kind of rampant.

Tamori: Next up is Hirai Ken-kun.
Ken: Yoroshiku Onegaishimasu.
Mariko: In the ranking video shown previously, we have seen that in the PV for the song that Hirai Ken is singing for us tonight, which is titled "Fake Star", has Hirai Ken's first kiss scene on screen.
Ken: Yes.
Tamori: You really did it ne!
Ken: I really did it!
Tamori: It looks really exotic, where did you go to shoot this PV?
Ken: Erm it was shot in Prague.
Mariko: Ah, in Czech republic!
Ken: Yes, in Czech republic.
Tamori: Was the other party (the girl) Czech?
Ken: Yes, we invited two models from the area to act with me.
Tamori: Two? *surprised*
Ken: Erm, yes. *nods awkwardly*
Tamori: You were going to kiss two people?
Ken: That was how it was planned ne. *nods more*
Tamori: Ehhhhhh!
Mariko: We heard that one of the actresses brought someone along with her as well!
Ken: *laughs* You see, it's like this. We chose these two from an audition of twenty people, so one by one we looked at them and decided on these two. These two people may look really mature but they are in actual fact just about 18 years old, give or take.
Tamori: Oh... *nods*
Ken: That's only half my age, which is really young. One of them brought along her boyfriend...
Tamori: Why did she bring her boyfriend along when she was going to do a kiss scene?!
Ken: ... Well this boyfriend was very big in size, which probably means the girl is not willing to do the scene with me ne?
Tamori: Ahhhh. *nods*
Ken: So she brought her boyfriend to the set, and he was Czech too. He was taller than me, was well-built, wearing a tank top and was around 20 years old. He has the kind of physique that in the event that I were to fight with him, I would surely lose. I was really afraid, as it was possible that I was going to get beaten up by him. He crossed his arms and watched us as we did the kiss scene.
Tamori: Watching you kiss? *incredulous*
Ken: Once the director shouted "Cut!", she immediately ran to her boyfriend's side, and I don't really understand Czech, but it feels like the girl is telling him "That guy is so disgusting!" or something similar. It was really nerve-wrecking.
Tamori: Eh, why did it turn out like that!
Ken: The pressure was really huge.
Tamori: Ohhhh, so if the director said "Once more," she would...
Ken: ...Come back very unwillingly...
Tamori: ...And once the shot was done she would run back?
Ken: Well actually, with her boyfriend on set we really couldn't continue the shoot, so at last we asked the boyfriend to leave the set.
Tamori: Oh so that was what happened?
Ken: Yes, it was really impossible to continue shooting.


I have so much to say about this short little video. xD

First off, Tamori called Hirai Ken "kun", God knows what their relationship is! (Then again, I don't really want to know.) Then Ken was so proud of his little achievement and it was just AWWWW.

The next thing that immediately caught my attention was how well-detailed he described the girl's boyfriend. He vaguely mentioned the girl's look in passing (looks very mature he says) but the boyfriend? He remembers every single detail. *Evil smirk* We know how you roll Ken-chan. *Knowing smile*

And then Ken just returns to his old-man cuteness by telling whining about how the girl mistreated him. In any case, the girl must either be very blind, or just really blinded by love to see the shininess that is Hirai Ken. Such a waste for her. *Shakes head*

Girl: OMGOODNESS HE DIDN'T EVEN TOUCH ME AT ALL!
Boyfriend: Not even with his hardon?
Girl: NO. HARDON.

At this point, one of the other guests was enjoying Hirai Ken's story a bit too much. She's none other than... 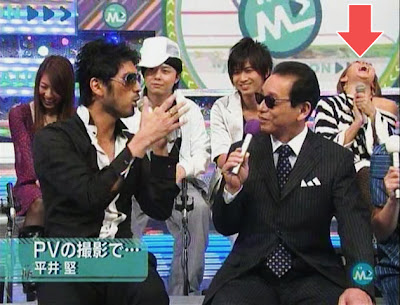 Our dearest Koda Kumi. xD I just love how she laughs freely on shows and just enjoys herself thoroughly all the time. She's such a joy to watch.

On a sort of irrelevant note, MY ORDERS ARE COMING REALLY SOON! YAY! They've already been shipped from HMV, which means they'll either arrive tomorrow or the day after. One more limited edition Hirai Ken item GET! Watch out for that post in a few days to find out which one it is, I still can't believe I found the darn thing (BRAND NEW!) on HMV at such a ridiculously cheap price!